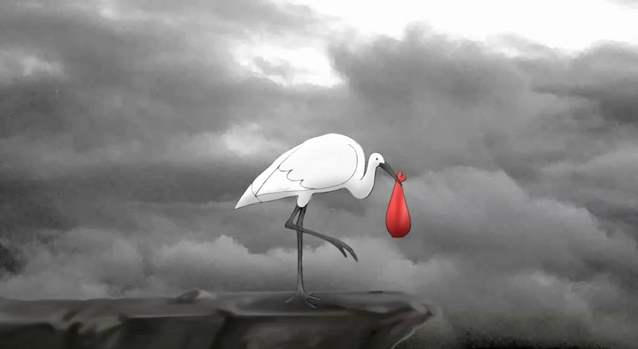 This post is about one of the ten short films in the Open University/BBC Creative Climate short film competition, made by students from UK film schools. You can see them all here on the OU’s YouTube channel.

The Stork, Kehan Wang, The Arts University College at Bournemouth

Echoing the concerns and images of 1970s environmentalism this unflinching hand drawn animation draws our attention to issues of population, consumption and the dire potential consequences of failing to act on these issues.

This film is about a stork delivering a believed baby in a bundle to the waiting people. Along its way, the stork has witnessed the heavily polluted environment, deforestation and emissions of air pollution caused by overpopulation. In the end the stork casts the bundle onto the ground, the believed baby turns out to be a skull, which symbolizing death.

The idea comes from the German folk tale tradition in which storks carry babies from heaven to earth. The stork is a symbol of fortune and birth. However, in my film I give an opposite meaning to the stork: if we don’t care about the population crisis, a good thing will turn bad.

This is a traditional hand drawn animation. I made it black and white to fit this serious subject. The characters such as people and the stork are more realistic than caricature. I just want people to feel the population crisis is really threatening us.

Although I have regularly argued with people who promote ‘doom and gloom’ narratives, and also with people that insist bluntly that there is a ‘population’ problem, there are things about this short film that stay with me long after viewing. It challenges my complacency. The drawing is beautiful, and the final film is the outcome of an enormously time consuming and skilled process.

It is as simple and efficient as the folk story it is inspired by and is truer to the folk tale tradition than the familiar largely sanitized versions generated in the nineteenth century. I think it is significant that Kehan is a Chinese student and hence brings a very different set of experiences and attitudes to this topic compared with the average Briton or North American. While she is raising a point about human numbers it is set within the context of patterns of consumption and urbanization that have been established in the developed world.